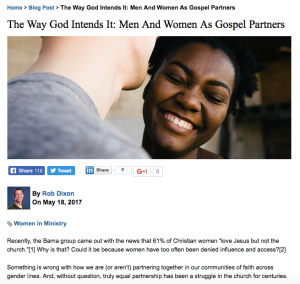 This past week I was featured over at the CBE blog with a piece entitled “The Way God Intends It.” My aim was to give a short theological justification for women and men serving together as full and equal partners in mission. You can find the piece here.

In response to the piece, a couple of folks on Facebook took issue with one of the last lines, and I want to reply to that. Here’s the part up for discussion:

“Adam and Eve, Moses and Miram, Jesus and Mary, Paul and Phoebe, Boniface and Lioba. All co-workers. All equal partners.

All the way God intends it.

The question they posed is a good one:

How could Jesus and Mary (it’s Magdelene we’re talking about) be considered “equal partners?”

My short answer: they can’t, at least in the big-picture sense. I mean, can any human be considered equal with Jesus?!? And so when the newly resurrected Lord and the very human Mary meet and partnership happens in the form of Jesus entrusting her with the good news about the resurrection, we shouldn’t assume that they are somehow equal. Mary is the messenger, but Jesus is the Lord.

And so perhaps my language could be more precise. Maybe “full partners” would be more accurate?

Or maybe not. Because, in revealing the good news of his resurrection and releasing Mary to be his ambassador, Jesus is making the dramatically counter-cultural choice to empower Mary into leadership. In fact, from the moment she meets Jesus in the garden until she testifies to what she’s been told in front of the disciples, Mary is the sum total of the church. She’s it.

So while it might not be accurate to label Jesus and Mary’s partnership “big picture equality,” perhaps we can dub it “functional equality?”

In Philippians 2, we get a glimpse into Jesus’ perspective on power. Though he has supreme power, he doesn’t see it as something to be grasped. Instead, he empties himself, in the process empowering others.

And I’ll argue that that is exactly what is happening with Mary in the garden. It’s what Jesus does. He releases his privilege. He empowers others, particularly women. And in the process, he treats them…

One response to “Theologizing”