If you’d had the chance to know her, you surely would have loved her.

Last week, Yami, a wonderful 56 year-old widowed grandmother, went to be with Jesus. The details are sketchy, but evidently someone drove up outside her house on a motorcycle, lured her to the garage gate, and gunned her down in her driveway. As to the motive of what would cause someone to murder someone like that, the Costa Rican police are still investigating. But I have an idea:

This summer, my family and I had the joy of spending two weeks in Yami’s house, as a part of our missions trip to Costa Rica. This news has hit us hard. We ache. For Yami. For her family. For her community. And we ache for our kids, who someday will have to hear the news that their sweet Yami was killed.

And so I want to remember Yami today. As a tribute. As a way to honor a hard life well lived. And as a way to celebrate a woman beloved by Jesus.

We’ll remember Yami’s all-out, unbridled hospitality. Sometimes, when you stay with someone you feel like a hotel guest. In Yami’s house, you felt like one of her children. In short order, our kids started calling her “Yami the Mami.” She was relentless with everything from doing our laundry to making sure we had enough to eat to having us debrief our day. On the last day of the outreach, when it was time to leave, she completely out-gifted us. At one point, after another lunch that was just too much food for us to eat, we gently, in my halting Spanish, asked her to throttle back on the portions. With reluctance, she complied, adding that she was looking forward to the group that would follow us as guests in her home. Why? Because they were four adult men, and she knew they would eat.

We’ll remember the way Yami loved our kids, and especially Lily. When Lily would walk in the house, Yami’s eyes would light up. And with cries of “oh, mi amor!” she would come over and pretty much attack Lily with kisses. In fact, Yami was so effusive with her affection that Lily began to be slightly reluctant to come in the front door! Yami loved kids, and especially her grandkids. We are devastated to know that they will grow up from here on without their loving grandmother.

We’ll remember Yami’s love for her country. It was our good fortune to arrive in Costa Rica with a week to go in the World Cup. And even though Costa Rica had been eliminated on penalties two days prior, the country’s successful campaign continued to reverberate throughout the land. It was estimated that a quarter of the population traveled into San Jose for the team’s welcome home rally. Yami’s daughter was at the rally, and we watched it on TV with Yami in her living room. I’ll never forget the tearful pride on Yami’s face as she watched the players file to the podium, one by one. And when team captain Bryan Ruiz got on the mic, he said something like “Que lindo ser Tico,” which translates to “it’s beautiful to be a Costa Rican.” It’s a sentiment that Yami shared.

Finally, we’ll remember Yami’s love for Jesus. One night in the second week, after the kids went down, Yami shared her testimony with us. It took a solid hour, and it might just have been the best hour of my trip. In rapid-fire, staccato Spanish, she told us about her hard life. Her son had been in a car wreck. She had had heart problems. She had been attacked at knifepoint in her own kitchen. She had endured the loss of her husband. And more. Given the language barrier, I think we understood only 50-60% of what she actually said, but one thing was clear: through it all, God is good. In fact, had she survived the vicious attack that took her life, she would surely have said it again:

Yami, rest in peace. We love you. Dios te bendiga.

Here’s a picture of our kids with Yami the Mami: 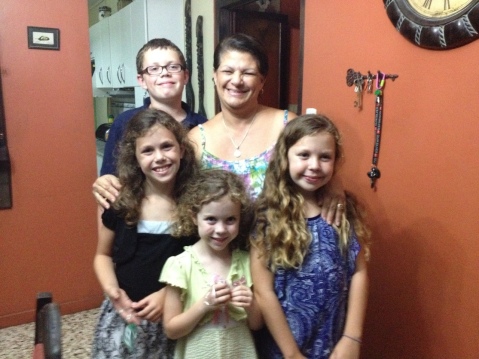