In a word, it’s breathtaking.

I’m talking about the Getty Museum, in Los Angeles. Even though I live relatively near there, I’d never before visited the Getty until yesterday. It’s phenomenal, and I wish I had had more time.

I went into the Getty praying for God to speak to me through the art. And, given that I was going to spend a good chunk of the day working on and thinking about my DMiss, I was asking God for a word about inter-gender partnerships in mission

Here’s one thing I found:

It’s a piece, by Valentin de Boulogne, called “Christ and the Adultress.” It dates back to the 1620s and it exposits, in a visual way, the events of John 8:2-11. To stand in front of the painting is to be overwhelmed by its drama.

Allow me a couple of reflections.

First, the darkness. Honestly, my camera makes it too bright. Its darker than that. It’s as if the artist is representing the depravity of the moment. Of the attempt to entrap Jesus. Of the indignity being perpetrated upon the woman. It’s a grim scene.

Next, the guards. The John 8 text talks about the religious leaders present; namely, the scribes and the Pharisees. It makes no mention of armed guards. Their presence in the painting serves to underscore the threat to the woman. Her life weighs in the balance.

Third, the woman. Scantily clad, under duress, possibly (the darkness of the piece makes it difficult to tell) bound at the wrists. For me a word to describe the woman is “vulnerable.” Dragged from having been caught in the act of adultery, she’s utterly out of control. Or maybe “exposed” is better. Perhaps the fact that she is the brightest, most visible part of the scene underscores her vulnerability before her captors.

Finally, Jesus. Though he is writing in the sand, he is the only one not looking down in the entire canvas. Instead, he looks at the woman. Yesterday I spent a lot of time trying to read Jesus’ expression. Here’s a close-up. What do you see? 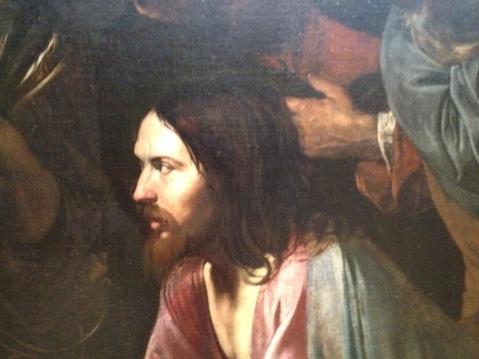 What I want to read is compassion. Or mercy. Or tender care. But I don’t really read those things.

Instead, I read something different. I can’t express it in a word, but I think it’s a look that says something like, “I’m taking you seriously.”

Jesus takes the woman seriously as a victim. After all, she’s a pawn in someone else’s evil game. And that matters to Jesus. She matters to him. And he’s going to free her from her plight, by turning the situation around and indicting her accusers. Off they will go, oldest to youngest.

But it’s not just that. Because Jesus also takes her seriously as a sinner. As someone in need of the forgiveness he alone can provide. And as someone who deserves and can handle the concluding admonition to go and sin no further.

When we take someone seriously, we respect them. We communicate worth. When we engage with them–the good, the bad, their situation, their future, and more–in an intentional way, we communicate their fundamental human value.