My Grammy was a proud Marine.

I mean, of all the amazing things she did in her life, serving her country as a U.S. Marine was right at the top of the list. Grammy enlisted on August 2, 1943, and family lore says that she was the first enlisted female Marine from the state of New York. She went through Basic Training at Parris Island, SC and, later, she graduated from the Corps’ Motor Transport School.

Assigned to serve at the Marine Corps Air Station El Toro in Orange County, CA, she worked as a truck driver and dispatcher. One day, she met my grandfather, an aircraft mechanic who saw action on Guadalcanal and the Solomons, at a street corner on post. In the end, she was discharged in 1945, after she became pregnant with my mom. 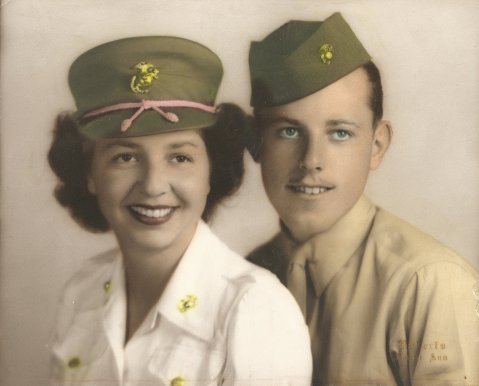 A good buddy of mine is in Washington D.C. this week, and today he sent me the following picture. It’s taken at the World War II memorial on the national mall, and it commemorates and honors the military service of women. In fact, it reminds us that it wasn’t just men that sacrificed and served.

It’s fitting to get this just days before Veteran’s Day, a day where honor the men and women who have served our country.

Last year, I saw the memorial in person, and I know my Grammy would have been proud.