Way back when I started Challenging Tertullian, I talked about the systemic nature of male privilege. In this post, I wrote:

“First, male privilege is a systemic thing. By their nature, systems are hard to see. They’re subtle. They sort of lurk in the culture, influencing from behind the curtain.”

Truth be known, for some people in this country and certainly around the world, male privilege is anything but lurking. In fact, for many women, it’s overt and right in their face. When I talk about male privilege being systematized, I’m talking about little things that add up to establish a systematic bias. Sadly, too often bigger things (such as violence against women) remind us that this malady can be anything but subtle.

On top of that, historically speaking, male privilege has at points enjoyed a higher profile in the culture. Recently, I came across this site, which consists of a collection of anti-women’s suffrage signs and posters. What’s “women’s suffrage” you ask?

Women’s suffrage simply refers to the right of woman to vote and to run for office. In this country, we have only had universal suffrage since 1920, a change that came as the culmination of a long and pain-filled battle on the part of “suffragettes.” Notable American suffragettes included Susan B. Anthony, Elizabeth Cady Stanton and Julia Ward Howe.

The life of a suffragette was anything but easy. Internal strife threatened the advancement of the suffrage movement. Funding was scarce. And finding new recruits was a constant concern.

On top of that, there was Tertullian.

Just take a look at two posters from the day, and imagine life as a suffragette. 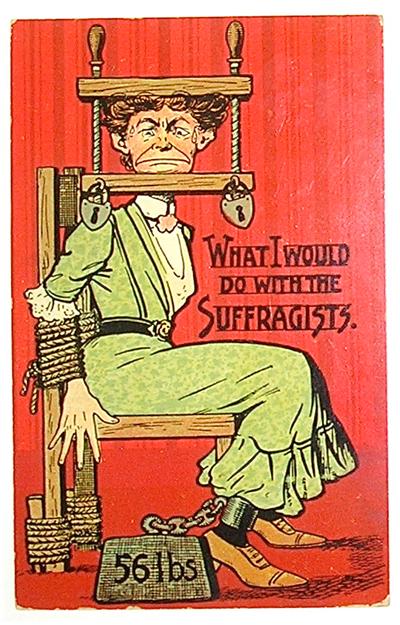 Today, we can be thankful that, by and large, male privilege today is something less than what these sexist signs and posters demonstrate. In that sense, our culture has indeed evolved. And yet as we’ve been seeing here on the blog, we still have a long way to go.