My family’s lot in life is to have a history major for a father.

So, among other things, this means that I’m at least tempted to stop at every roadside historical marker, park, museum and monument. And while much of the time–with a bit of, ahem, assistance–I manage to resist the temptation, sometimes you just can’t.

Which is why we found ourselves touring the Gerald Ford Museum in Grand Rapids, MI over lunch today.

Turns out Jerry Ford has a pretty nice museum that honors his 70’s era, partial term administration. In particular, we appreciated the oval office and cabinet room mock-ups. The section on Watergate was interesting too, of course. I found myself seriously questioning Ford’s decision to pardon Nixon. I mean, you can understand his impulse of wanting to spare the country the pain, but, you know, sometimes the best way to recover from pain is to go right through it.

In any event, another section that caught my eye was a piece on Betty Ford, Jerry’s activist wife. Cancer crusader, addiction confronter and, turns out, women’s rights champion. Here’s a shot of Betty proudly sporting her ERA pin: 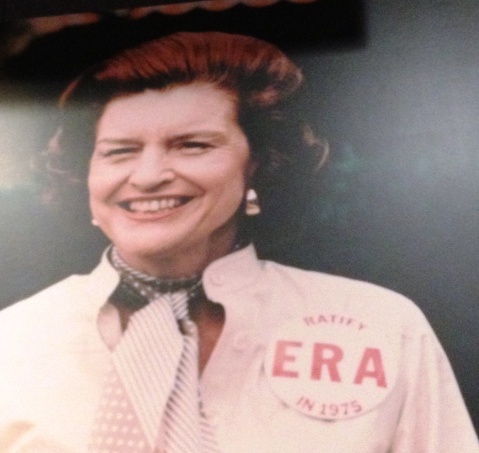 I absolutely love how Betty Ford levied her influence with regard to women in government:

“I used everything,” she admitted later, “including pillow talk at the end of the day, when I figured he was most tired and vulnerable.”

The First Lady’s pillow talk and otherwise resulted in a Ford presidency that had women in upper leadership and, most notably, a January 1975 executive order establishing the National Commission on the Observance of the International Women’s Year. That’s a mouthful, but an important one.

In a day and age where the United States ranks a pathetic 91st in women’s participation in the national legislature (a full 37 percentage points behind leader Rwanda and just behind the Slovak Republic, Indonesia and some country called Sao Tome and Principe), it’s time for more of a dose of that kind of influence.

At Jerry’s place, you couldn’t laze around in the oval office display, but you could sit in the cabinet chairs, which is how I found myself taking this picture: 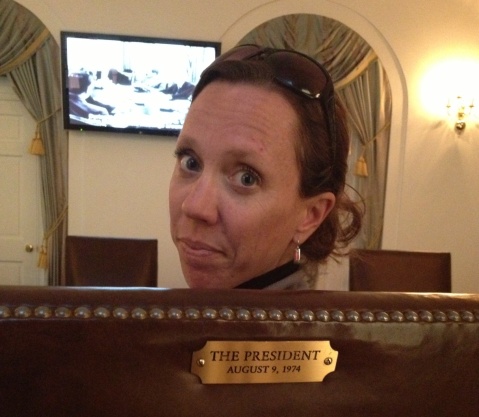 Trust me, if you could have any Dixon in the oval office, you’d want this one. So, join me. Make the country a better place.