Don’t get me wrong, we certainly have princesses here in the Dixon house.

After all, with three little girls growing up in a princess-ized world, it’d be tough to avoid the phenomenon. And so it’s not out of the ordinary to have Belle, Cinderella and Snow White bounding around the house yearning for their hoped-for salvation at the hands of some mythical prince. Around here, sometimes the princesses need their heroes.

The question is: Is this a good thing?

I’ve thought a lot about this, and here’s where I’ve landed:

There’s nothing fundamentally wrong with the princess narrative. You know, the captured princess, pining away for her virtuous and brave savior. As a story, Prince Charming, he’s not so bad.

Prince Charming, you’re not the only show in town.

Several readers sent me a link to this story, about a new line of shirts from the folks at Disney. Rather than recap the story, I want to share a screen shot: 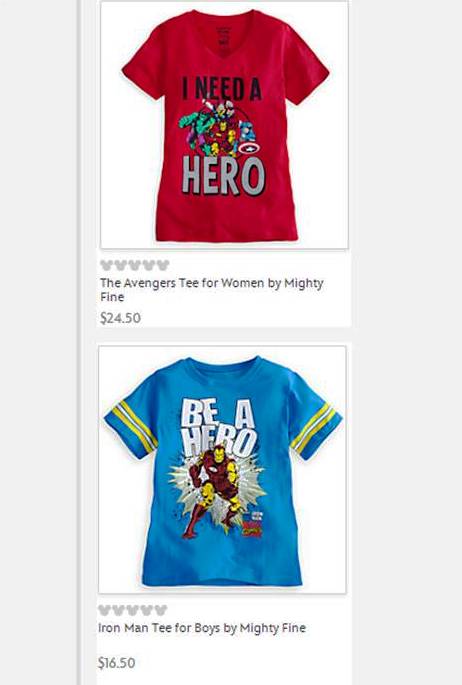 The message here is pretty clear. Disney is letting our kids know that boys are heroes and girls are not. In the process, Disney is reinforcing the presence of privilege.

Tertullian would tell my kids that Disney is right and that the princess narrative is the only the only true gender story, that a girls’ lot in life is to be the saved, the protected, the pursued.

I’ve been enjoying Sheryl Sandberg’s new book Lean In. In her first chapter, Sandberg describes what she calls the “leadership ambition gap,” a term that describes how men are more eager for influence than women. She writes:

“Professional ambition is expected of men but is optional–or worse, sometimes even a negative–for women. ‘She is very ambitious’ is not a compliment in our culture…Men are continually applauded for being ambitious and powerful and successful, but women who display these same traits often pay a social penalty. Female accomplishments come at a cost.”

So, listen up Princess. Sometimes Prince Charming will indeed come save you, but sometimes he’ll need you to save him as well. And as that time comes:

One response to “What About Princ-ess Charming?!?”